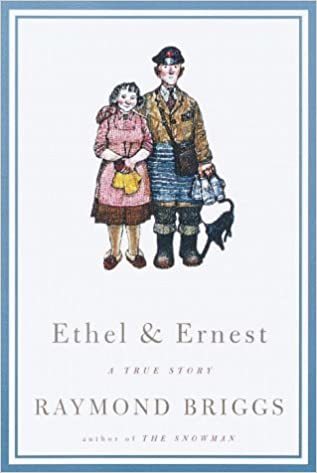 Poignant, funny, and utterly original, Ethel & Ernest is Raymond Briggs's loving depiction of his parents' lives from their chance first encounter in the 1920s until their deaths in the 1970s.

Ethel and Ernest were solid members of the English working class, part of the generation that lived through the most tumultuous years of the twentieth century. They met during the Depression--she working as a maid, he as a milkman--and we follow them as they court and marry, make a home, raise their son, and cope with the dark days of World War II. Briggs's portrayal of how his parents succeeded, or failed, in coming to terms with the events of their rapidly shifting world--the advent of radio, television, and telephones; the development of the atomic bomb; the moon landing; the social and political turmoil of the sixties--is irresistibly engaging, full of sympathy and affection, yet clear-eyed and unsentimental.

Briggs's illustrations are small masterpieces; coupled with the wonderfully candid dialogue, they evoke the exhilaration and sorrow, excitement and bewilderment, of experiencing such enormous changes. As much a social history as a personal account, Ethel & Ernest is a moving tribute to ordinary people living in an extraordinary time.