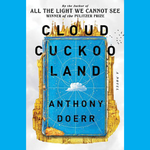 Richard or “Dick” to most of his friends and family was born and raised in Chicago as was his wife, Doris. He graduated from the University of Illinois with a BS degree in Chemistry in 1952 and earned a second degree in Chemical Engineering in 1954. Dick and Doris were married in Feb 1955 and moved from Texas to Decatur in 1957 when Dick started his career at A.E. Staley Mfg. Co. Three of their four children were born in Decatur; all four attended Oak Grove and MacArthur High School. All four have done very well which he attributes to Decatur Public School system. Dick and Doris enjoyed traveling, their couples club, First Presbyterian church groups, bridge, golf and grandchildren and great-grandchildren of which there are currently 16. Doris passed away in 2019. Dick belongs to a family book club in which he and his children and grandchildren take turns choosing books for the entire family to read.

The novel, “Cloud Cuckoo Land,” written by Anthony Doerr, author of the Pulitzer Prize-winning “All the Light We Cannot See,” was on the New York Times bestseller list for 19 weeks, was a New York Times Notable Book, a Barack Obama Favorite, a National Book Award Finalist, and named a Best of the Year by Fresh Air, Time, Entertainment Weekly, Associated Press, and many more. “Cloud Cuckoo Land” consists of three unique and independent stories covering a period of 800 years, yet intrinsically linked together by an inane, comical Greek myth written by Antonius Diogenes in 3 BCE titled “Cloud Cuckoo Land.”